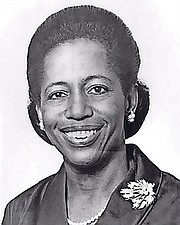 Leader of the Official Opposition Philip “Brave” Davis said Lady Maynard was a “true matriarch of the Maynard family, a pillar of strength and the wind beneath Sir Clement’s wings as he worked tirelessly in public life on behalf of the nation.”

He described her as being a “supporter of the progressive movement,” adding the Progressive Liberal Party thanks her for “her selflessness in her support role” in sharing her husband with the nation.

“In her own right, she was a freedom fighter, particularly for women’s rights and in the arts,” Mr Davis noted in a statement. “She followed in the footsteps of her own dear mother Meta Davis Cumberbatch as a patron and supporter of the arts and artists.

“Lady Maynard has been faithful; she ran a good race and has gone on to receive her just and eternal reward.”

The party said: “The Free National Movement also send its condolences to the Maynard family in the loss of Lady Zoe Maynard who also passed this weekend. Lady Maynard was a loyal and faithful wife to her husband Sir Clement who serve this country with distinction for many years. Lady Maynard will be missed and the country will be forever grateful for her contribution.

“The Bahamas has lost two great Bahamians, may their souls and all the souls of the faithfully departed rest in peace.”

Lady Maynard was predeceased by her husband of 62 years, Sir Clement, her son C R Julian Maynard and her sister, Gloria Lockhart.

A mass to celebrate her life will be held at St Matthew’s Anglican Church on Shirley St and Church Lane this Wednesday at 3pm.

In lieu of flowers, donations may be made in the name of Lady Maynard to Abilities Unlimited or the Bahamas Humane Society.