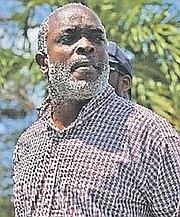 A BENCH warrant was issued yesterday for Omar Archer, the Minnis administration appointed registrar of contractors, after he failed to attend a hearing in a new court action against him.

Kyle Dean, a young Progressive Liberal Party supporter, is seeking a restraining order against Mr Archer, accusing him of stalking and defaming him.

The case, which has not started in a substantive way, was expected to start in earnest at the Magistrate’s Court yesterday, but was adjourned because Mr Archer did not attend when a police prosecutor called for him.

Once issued by judges, bench warrants are entered into a system by prosecutors and police are expected to arrest people and bring them to the court that issued the warrant at the earliest time possible. Typically, it is not hard to get such warrants discharged.

Last week, The Tribune reported on a viral video in which Mr Archer accused a close relative of Mr Dean of committing indecent and illegal acts involving a minor.

Mr Dean said of the video: “The comments he made are distressing, they are untrue, they are unwarranted and as a professional I should not be subjected to the attacks of a political appointee, especially when I have a career that is sensitive.”

He also said: “My family is very much offended and stunned by it because they did nothing to warrant these attacks and upon the video circulating they have sought legal advice. That nothing has been done to censor him by his bosses is even much more stunning to my family. The family is very much hurt. The comments were also very careless because sexual molestation or unlawful sexual intercourse with minors is a serious issue. It’s not something that should be used to exact revenge on your opponents.”

Mr Dean said his family has been bombarded by calls since the video went viral.

“We’ve had so many people reach out to us who are concerned about the emotional and psychological impact they think his comments may have had on my family,” he said. “We’ve received calls from people calling on my family to rise above the fray during this time of unwarranted attacks by a high-ranking official.

“When the government appoints people to the public service to high-ranking positions, they should be held responsible for their actions and what they do. Regardless of how much a person is politically connected, they should never get away with making such libelous statements against people without repercussions.”