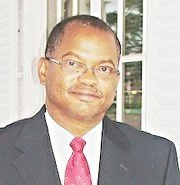 A top heart doctor was yesterday ordered to pay almost $300,000 to RoyalFidelity Merchant Bank & Trust after losing his “negligent/fraudulent misrepresentation” appeal over a disputed margin loan.

The Court of Appeal, in a unanimous verdict, found Dr Conville Brown “was in breach” of a near two decade-old agreement he made to borrow money from the Bahamas-based investment bank.

The loan, which was secured against the value of the stocks and securities in his brokerage account at RoyalFidelity, stipulated that the sum borrowed must never exceed 50 percent of these investments’ collective value otherwise it would fall into default.

These securities were valued at $329,751 when the loan was agreed on February 17, 2000, and RoyalFidelity agreed to advance a margin facility of $164,875 that was worth 50 percent of the collateral pledged.

However, the Bahamian stock market - and value of the securities in Dr Brown’s brokerage account - plummeted after the September 11, 2001, terror attacks and failed to recover. This placed the loan facility in default, and caused RoyalFidelity to make a “margin call” on October 4, 2002.

It warned the well-known cardiologist that his securities investments “had so declined in value” that he was now only eligible for a $98,111 margin loan, and had accumulated a $179,773 overdraft. Offsetting the two sums, Royal Fidelity told Dr Brown he either had to increase the amount of securities in the brokerage account or pay the $81,662 difference to bring the margin loan back into compliance with the 50 percent threshold.

While some of this sum was paid, RoyalFidelity initiated legal proceedings against Dr Brown after it failed to receive the full amount. The doctor accused the merchant bank of “deceiving him into entering” the margin loan deal by suggesting it was “a market maker, and would so manage his securities in his brokerage account that he would never have to provide any additional funds to secure his loan facility”.

This formed the basis of Dr Brown’s defence and counterclaim, whereby he alleged that RoyalFidelity induced him into the margin loan deal by allegedly promoting itself as a “market maker” able to buy and sell securities at will to keep his facility current.

Arguing that this claim was “made fraudulently” and “recklessly”, the doctor sought damages himself for purported negligence and fraudulent misrepresentation. But the Court of Appeal’s judgment yesterday, backing the earlier Supreme Court verdict, found that Dr Brown had not provided sufficient evidence to support his claims.

The Bahamas Heart Centre principal now faces having to repay some $86,113 in principal to RoyalFidelity, together with 14.25 percent interest on this sum for a period of 17 years and counting. The Court of Appeal ruled that the interest clock started running on October 4, 2002, when the investment bank first made its demand for payment to bring the margin loan deal back into compliance.

Tribune Business’s calculations show that the interest bill is currently almost two-and-a-half times’ the principal Dr Brown must pay. The annual interest cost at 14.25 percent is some $12,271, and multiplying that by the 17 years’ gives a cumulative figure of $209,609.

When added to the principal sum this takes RoyalFidelity’s total award to some $296,000, and the Court of Appeal’s finding that Dr Brown must pay the legal costs incurred by the investment bank before both itself and the Supreme Court will likely push the latter’s total compensation towards $400,000-$500,000.

Justice Milton Evans, writing the Court of Appeal’s verdict, said the margin loan agreement’s terms provided the necessary “disclosures” to Dr Brown, who “was made aware of the responsibilities, which were his, to safeguard his investment. It also clearly informed him of what his liabilities were.

“In these circumstances, the document could not support a claim for negligence nor his allegation of misrepresentation as disclosures were made to him as to the proper operation of the relationship.”

RoyalFidelity, in its defence to Dr Brown’s counterclaim, said the margin loan’s terms were such that it had the right to sell-off securities in the loan account after giving 14 days’ notice if their value fell below 50 percent of the loan amount.

It gave this notice by letter on October 4, 2002, when Dr Brown was warned the merchant bank would make a “margin call” and begin to liquidate securities in his investment portfolio unless he closed the $81,669 outstanding balance.

The doctor was then told on March 6, 2003, that the sell-off had begun but as “the value of the shares were insufficient to satisfy the outstanding loan balance” Dr Brown would have to pay any remaining debt in cash.

“As at March 6, 2003, the total value of the shares held on account was $81,900 whereas the total sum owing was $94,527,” the Court of Appeal recorded. “The Plaintiff endeavoured without success to sell the defendant’s shares because of the lack of confidence amongst investors and, by letter dated the November 27, 2003, [it] requested that the defendant deposit a cheque in the sum of $94,595 to satisfy the outstanding balance.”

RoyalFidelity thus denied it had committed a “breach of fiduciary duty”, or been guilty of negligent or fraudulent misrepresentations - an assertion that then-Supreme Court justice, Neville Adderley, agreed.

Dr Brown’s attorney, Wayne Munroe QC, based the appeal on verbal “representations” allegedly made to his client by Anwer Sunderji, Fidelity’s chairman and chief executive. However, Bar Association chairman, Khalil Parker, who was acting for RoyalFidelity argued that the doctor never “properly pleaded a case of negligent or fraudulent misrepresentation”.

The Court of Appeal agreed, finding that the issue of verbal “representations” was only raised by Dr Brown in his testimony before the Supreme Court, and that he “came away with certain understandings on which he relied” rather than being told something that was ultimately shown to be untrue.

“The evidence given by the appellant [Dr Brown] did not meet the standard of proving the claims which he asserted, and the onus was on him to prove his claims,” the Court of Appeal found. “He had to prove that he was induced to enter the agreement by misrepresentations which were made fraudulently.

“As found by the judge there was insufficient material before the court to establish the wording of the representations, nor the state of mind of the persons alleged to have made those representations.... It is clear from the evidence that the appellant was in breach of the agreement which he entered into with the respondent [RoyalFidelity].”