Police arrest woman after she shoots gun from moving vehicle 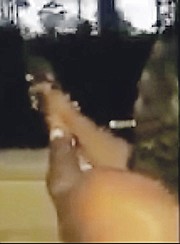 A still from the viral video.

A WOMAN was taken into police custody on New Year’s Day in connection with a viral video taken of what is believed to be her shooting a gun from a moving vehicle.

In the 41-second long clip, the woman was seen firing a shot into the bushes from the passenger seat of a car.

Other people in the vehicle can be heard off-camera instructing her on her technique.

“Give me it, give me it, let me do it,” the woman can be heard saying as she reaches for the gun.

Eventually the woman fires the gun.

Supt Knowles said yesterday: “Police have taken a 30-year-old female into custody, Tuesday, 1 January, 2019 in connection with the viral video of a female firing an illegal firearm from a vehicle. Investigations into this matter are ongoing.”

Police, however, did not confirm where the incident occurred.

Up to press time, the video had been shared over 1,000 times on Facebook, with many people expressing concern and outrage.

“No one knows how far a stray bullet travels before hitting an unknown target! This is how innocent people are killed,” one user commented.