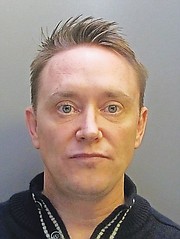 A BRITISH man who has fled his prison sentence in the United Kingdom may be hiding out in The Bahamas, according to international reports.

British police are searching for Shane Murphy of Cambridge, who has been recalled to prison. In May 2017, he was sentenced to four years and four months for a number of domestic violence offences relating to his wife Zoe. The claims include that Mr Murphy broke his wife’s leg while she was pregnant, locked her in rooms with no electricity, and threw objects at her, according to Cambridgeshire Live.

“It is believed businessman Shane Murphy has swapped his prison cell in Peterborough jail for the beaches of the Caribbean island after being released on licence - and failing to return,” Cambridgeshire Live reports.

“Cambridgeshire Live understands Murphy was released on licence from prison and breached that order and may have fled to Brazil and possibly flew on to The Bahamas where he has business interests. It is also believed he joined his girlfriend.

“Mr Murphy was building up a business empire at the time creating Limitless Mobile providing broadband and wireless telecommunication services in rural counties in central Pennsylvania,” the report continues.

At some point, Murphy began operating in the Bahamas. A report from Mirror News states that he moved to the Bahamas; while on his personal website, Murphy describes himself as a “Bahamas based business owner”.

Described by Cambridgeshire Live as a “cruel and controlling” husband, Murphy reportedly abused his wife for years.

“(In 2009) When she was 20 weeks pregnant Murphy broke her leg and warned if she told anyone he would make sure she would never meet her baby,” the News site reports.

“The decade of abuse also included locking his wife Zoe in rooms, telling her she was fat, worthless and ugly and throwing objects at her on a regular basis amid relentless controlling behaviour.

“He would order her to be home by a certain time and would often not let her leave the house, even to walk their dog.

“Murphy would check her receipts and previous journeys on a sat nav (satellite navigation).”

The entrepreneur admitted a string of charges committed in Cambridgeshire and Hertfordshire.

“Murphy was convicted of engaging in coercive or controlling behaviour, inflicting grievous bodily harm (GBH) without intent (the 2009 offence), assault by beating and two counts of sending communications conveying a threatening message in relation to Zoe’s stepfather and teenage son.

“Between August 1 and November 21, 2017 Murphy breached the conditions of his release from prison, as well as his restraining order. Hertfordshire police were also notified of an assault on November 9 where Murphy had locked Zoe in a bedroom, pushing her around and grabbing her by the throat,” the report noted.