Simmons secures silver at the Caribbean Cycling Championships in Cuba 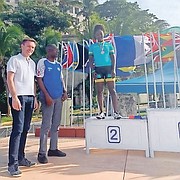 ANTIENCE Simmons made her maiden voyage for the Bahamas on an international trip a successful one.

As one of three Bahamians competing in the Caribbean Cycling Championships in Cuba on Saturday, Simmons secured a silver medal in the under-23 elite women’s individual time trials.

She came back on Sunday and had to settle for fourth place in the road race.

Giles and Lorin Sawyer, no direct relations, also represented the Bahamas in the event.

Lorin Sawyer, who hails from Spanish Wells, improved on his performance in last year’s timed trials with a 16th place this time around and ended up 38th in the road race - finishing as the first Bahamian ever to complete the peloton.

Giles Sawyer, a native of Exuma, did not finish, but he earned the experience having done a few laps in the road race before he was dropped from the field.

“The time trials were a bit easy, but the road race was a little harder,” Simmons said. “I know I could have done a lot better if I had trained harder. I needed more time to train.”

But she made a promise before leaving town that she would return home with a medal.

“The competition was a little hard. The competitors all raced very well,” she pointed out.

“I was just very glad that I won the medal.”

It was the first time that a female represented the Bahamas on the international stage and Simmons, a veteran competitor of at least 12 years, said she was glad to have made the breakthrough. “This gives me a good indication of where cycling is and what I need to do,” said Simmons, who at 22-years-old is undoubtedly the top female cyclist in the country. “Next year, I will try to do better than I did this year.”

Although she has competed in events in the United States, Simmons said the Caribbean Cycling Championships has boosted her desire to compete in more international events for the Bahamas.

“I think I did very well for my first time,” said Simmons, who is employed at Cycles Unlimited.

“My coach (Roy Colebrook) said I should be going to the United States at least every two months to get in some training.

“That should help me whenever I get the opportunity to compete for the Bahamas again. I am really looking forward to it.”

Colebrook, the president of the Bahamas Cycling Federation, said the Bahamian three-man team was selected as a result of their performances at the National Championships in July and the trials held in September. Both Anthony ‘Biggie’ Colebrook and Jay Major, two of the country’s top cyclists, were expected to compete in the event as well, but both withdrew their participation because of personal commitments.

“We were elated because we had so much firsts,” Colebrook said. “We got our first medal at those games. This was the first time we took a female and she medalled.

“This was also the first time that we had a peloton finish from Lorin Sawyer, who qualified for both the CAC and Pan American Games. So we are very happy and proud of the performances of those cyclists.

To top it off, Colebrook was elected as the new vice president of the Caribbean Cycling Federation.