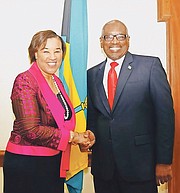 NATURAL disasters like Hurricane Dorian have created more "climate refugees" globally leading the Commonwealth to consider what can be done to enable citizens to stay in their home countries when tragedy strikes.

According to Commonwealth Secretary General Patricia Scotland, QC, there will have to be a push to deal with the issue country by country with a view to creating sustainability in economies.

The meeting came after she and a delegation toured Abaco.

Describing the Abaco devastation as "daunting" and "heartbreaking," Baroness Scotland said she planned to take images of the destruction to all international meetings to stress climate change implications and the need for countries to work together to combat the issue.

"I believe this is a global challenge and one of the issues which has been really important for us to consider how climate change is making more climate refugees . . .and trying to deal with that country by country by being able to create sustainability in each state to enable people to stay home," the Baroness said.

She was responding to a question from The Tribune about whether the Commonwealth had any ideas on how the Bahamas might combat immigration issues that have increased in the wake of Dorian. Many Haitian migrants have been displaced by Dorian and the government has doubled down on illegal immigration rhetoric.

Shanty town lands are being razed and no undocumented person is safe from deportation, officials have said.

"This is a global problem. Look at Syria.

"One of the reasons that Syria had difficulty was because of the climate change that took place in that country and migration, so this isn't just an issue for the Bahamas this unfortunately is a global issue," the Baroness added.

"Every country is going to have to think together as to how we do this."

This issue aside, the Secretary General said her visit to the country came out of a need to see the devastation in Abaco in person, noting that for three decades the Commonwealth had worked very hard to raise climate change matters.

She also plans to visit Grand Bahama this week.

"As many of you all know I came because I wanted to see for myself what had happened both in Abaco and Grand Bahama. The Commonwealth has for many years been raising the whole issue of climate change.

"Way back in 1989 the Commonwealth of 53 countries of which the Bahamas is one said that if you had any delay in addressing these climactic issues then we would have the sort of damage that we are seeing now in the Bahamas today.

"For those 30 years the Commonwealth has worked really hard to raise this issue of climate for the global community.

"However we have seen that nature can be very unpredictable and since 2013 the nature of the hurricanes has become more extreme and more damaging and Dorian is perhaps the biggest hurricane we've ever seen in our world today. It stayed longer and it created more damage than almost anything in any other small island state.

"So we are now looking at what do we do now," she continued, "How can we come together as a Commonwealth, as a world and do everything in our power to make sure it doesn't happen again.

"But I find it heartbreaking to go to Abaco to see the utter devastation of people's homes and their lives.

"To see buildings crushed, trees snapped as if they were twigs and the destruction of homes was quite daunting and painful.

"I am glad that I had the opportunity to see for myself what others had described to me because it means that we have to work even more urgently to bring together the sort of tools that we need to make a difference."

The Commonwealth has formulated a number of initiatives to assist countries dealing with the effects of climate change, Ms Scotland told reporters.

These include the Climate Finance Access Hub and the Blue Charter, with action groups looking at how to implement the needed changes.