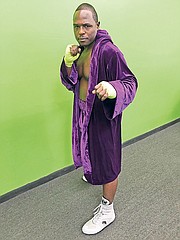 AFTER making a successful debut last month in Miami, Florida, D'Angelo Swaby will be back on the road to take on his second professional fight, this time in Redding, Pennslyvania.

On September 20 at the Joe Celestin Center in Miami, Swaby pulled off a third-round technical knockout in their scheduled four-rounder over Keenon Jackson, an American orthodox fighter out of Tampa, Florida, who was also making his debut.

"It was great," said Swaby, who had an extensive amateur background. "There weren't any butterflies because I was used to fighting on the big stage as an amateur. "It was more a feeling out process to say 'wow, I made that transition from amateur to pro and this is what it feels like.' So this was more a relief that I finally did it and I'm now a professional."

Swaby, 30, had contemplated turning pro after he didn't make the 2016 Olympic Games' team. But he took his time and waited for the right opportunity to make the transition.

"My plan right now is to stay in the sport for the next four years before I leave because of my age," he said. "I want to fight on a bigger platform to get my name out there before I go after a championship belt."

When he began as an amateur, Swaby was under the tutelage of Ray Minus Jr in his Champion Amateur Boxing Club in 2013. However, he moved to Ronn Rodgers' Strikers Boxing Club.

The aviation mechanic and pilot instructor, who operates his own business called Hrizin, still is affiliated with Rodgers, but he is currently fighting as a pro as an independent fighter.

On Saturday, October 26, Swaby will return to the ring to fight on the undercard of the super welterweight headliner between Erickson Lubin and Nathaniel Gallimore at the Santander Arena in Redding.

Swaby, with his orthodox stance at 5-feet, 9-inches, is scheduled to tackle another orthodox fighter in 6-3 Norman Neely from Paterson, New Jersey. Neely, 29, is 3-0. "He's not as good as me, but he's alright," Swaby said. "I'm not bragging about myself, but I am just that confident in my ability."