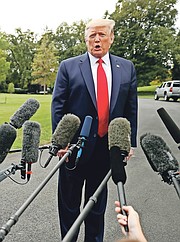 President Donald Trump speaks to members of the media on the South Lawn of the White House yesterday. Photo: Andrew Harnik/AP

AS weary storm survivors seek refuge in the United States, President Donald Trump said his country must be careful not to let “very bad” people from The Bahamas through its borders.

He was responding yesterday to the outrage that emerged when the crew of the Balearia Caribbean Ferry demanded that passengers without a US visa disembark the vessel on Sunday night, prompting the exodus of more than 100 people in Grand Bahama.

One person told Brian Entin, a reporter for Miami TV station WSVN who was on board the vessel, that leaving was painful because he had to watch his daughter cry.

President Trump said his administration is looking into the matter and talking to “lots of different people on that.”

“We’re recovering from the hurricane also,” Mr Trump told reporters on Monday. “Florida did get hit, not as hard as we anticipated and if you look at Georgia, you look at South Carolina, North Carolina…we’re also recovering from a hurricane. But we have to be very careful. Everybody needs totally proper documentation because look, The Bahamas has some tremendous problems with people going to The Bahamas that weren’t supposed to be there.”

Mr Trump also said: “I don’t want to allow people that weren’t supposed to be in The Bahamas to come into the United States, including some very bad people, some very bad gang members and some very, very bad drug leaders, so we’re going to be very, very strong with that. Let me just explain. Large sections of The Bahamas, believe it or not, were not hit and what we’re doing is bringing the people to those sections of The Bahamas that have not been hit. We’ve done a lot of the USAID, we’ve done work with our Coast Guard, our FEMA people, they’ve been phenomenal.”

National Emergency Management Agency (NEMA) officials emphasised yesterday that no special arrangements have been made to facilitate the entry of Bahamians affected by Hurricane Dorian into the United States.

Bahamians travelling to the US can do so with a passport and a clean police record once they transit through a pre-clearance point. However, a visa is required for travel by sea, though this requirement was reportedly waived this weekend when the Paradise Cruise Line’s Grand Celebration arrived at the port of West Palm Beach with nearly 1,500 passengers from the country.

Last week, US Senators Marco Rubio and Rick Scott asked President Trump to waive some visa requirements for Bahamians following Hurricane Dorian and to make it easier for them to seek shelter with their families in the US.

Senator Scott, in a statement yesterday, called on the US Customs and Border Protection to work with the Bahamian government to clarify rules regarding visas in The Bahamas so confusion does not occur.

In an interview with Mr Entin, US Customs Border and Protection representatives said Balearia forced passengers off without prodding by them. One said: “We would’ve basically made sure that everyone was properly documented and facilitate that process working with the cruise lines so why they said that I wouldn’t know and it’s really heartbreaking for them to say that to these people who have really suffered beyond comprehension.”

Another official said had the passengers arrived to US borders, they would have been processed and vetted in accordance with US laws.

“I think it was a business decision by Balearia to remove them, they were not ordered off the boat by any US government entity,” the officer said, adding they would have been allowed to enter the country on a passport and police record. The officers recommended that transportation companies coordinate with the Bahamas government and the US embassy in Nassau to make sure the process is orderly and that expectations are not unreasonably raised.

In a statement released last night, Baleària apologised for the ferry situation.

“We continue to maintain a policy to transport at no charge those affected citizens of The Bahamas who are in need of such transportation to Florida or between Freeport and Bimini,” the company said. “We regret and apologise for the hardship and inconvenience experienced by the 119 passengers who are residents from Grand Bahama Island who could not be transported yesterday, Sunday, September 8. We boarded these passengers with the understanding that they could travel to the United States without visas, only to later having been advised that in order to travel to Ft Lauderdale they required prior in-person authorisation from the immigration authorities in Nassau.

“In coordination with US Customs and Boarder Protection (CBP), our company is informing all Bahamian residents of the required travel documentation necessary for travel to Ft Lauderdale.”