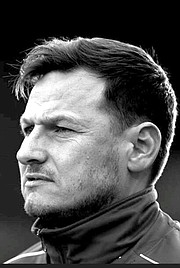 He will fill a void left by Garry Markham last year.

Although the BFA had hoped to complete the deal in March, the outbreak of the coronavirus pandemic delayed the process then on his way here in May, Bircham was arrested by police in St Petersburg, Florida on suspicion of aggravated battery.

While it’s understood that Bircham has been cleared of all charges, he’s still not in the country. But BFA’s general secretary Fred Lunn said they are eagerly looking forward to the arrival of the 42-year-old Londoner.

He will be coming on an initial two-year contract.

“He’s not physically here on the island. We’re just taking the right precautions and the direction of the government on when people can come into the country,” said Lunn of Bircham, who is still out of the country due to the Bahamas government closing the border as a result of the spread of the coronavirus pandemic.

“Even if he was here, he would be working virtually by Zoom because we’re not allowed to actually go out and physically do any coaching. So with him not being on the island does not affect us because we still can’t open up and play any games.”

According to Lunn, Bircham brings a vast knowledge and passion for the sport with a strong background in youth development based on his European experience as a former professional player for Queen Park Rangers (QPR) and youth development manager.

In his new role as technical director, his primary focus will be on developing grassroots and women’s football at all levels throughout the Bahamas.

Bircham will also guide the growth and development of football in the Bahamas across multi competitive platforms for youth, men and women’s national teams.

“He has a large responsibility, but when you look at his credentials, you can see that he comes to us highly regarded in terms of developing programmes for coaches and players.”

By accepting the job, Lunn said they are confident that Bircham can come in and redirect the programme in the direction that the BFA needs it to go as they follow the guidelines as outlined by FIFA, the governing body for soccer around the world.

Lunn said Bircham will also have the opportunity to work with the men’s national team as they prepare for the CONCACAF Qualifiers for the FIFA World Cup QATAR 2022 during the window of October and November 2020. “We are placed at a difficult situation where we might be actually going into a tournament where we are not 100 per cent prepared physically, or mentally having an opportunity to train with the guys,” said Lunn of the team that will be coached by Nesley Jean.

“The competition from some of those countries are much better than ours because they are allowed to travel.

“We’re a little at a disadvantage, but we’re hopeful that this will be worked out in another month or so for the national team to at least work outs and hopefully we can get all of football back in action.”

The Bahamas will be one of 30 teams in the new CONCACAF Qualifiers with three rounds for three and-a-half World Cup slots.