Tyson's rumble on the reef

This was a much-needed showcase for the island, where the tourism industry continues to struggle with the aftermath of Hurricane Dorian and the COVID-19 pandemic.

With nearly 27 million viewers tuning in globally, Shark Week is one of the top watched cable television programmes. During the one-hour programme, Tyson was filmed scuba diving with lemon sharks, reef sharks and tiger sharks in the waters of Shark Junction and Tiger Beach.

Tourism officials on Grand Bahama said the island’s vast marine life and natural beauty were on full display on “one of television’s most anticipated summer events”. 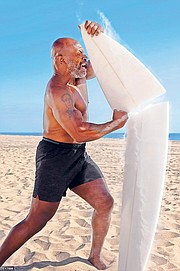 In the Tyson programme the first part of the challenge saw him cage diving with lemon sharks, while the second round upped the ante with an open ocean dive during which he had to gently push the sharks away if they came too close.

But the third round was where it really got scary for Tyson. The former boxer threw up before diving nearly 50 feet underwater without a cage, then had to grab a shark and try to immobilise it.

Tyson could be seen grabbing the shark by the nose as it swam past and turning it on its back, successfully inducing the hypnosis-like state.

“I took on this challenge to overcome fears I still deal with in life,” Tyson said. “I equate this with overcoming my fear of getting back into the ring at 54-years old.

“Doing Shark Week taught me that whatever intimidates me, I am still able to step up to the challenge of overcoming anything that would prevent me from accomplishing my life’s mission of reaching my highest potential in life and bringing me closer to God.

“I was scared all the way through and was just trying to get through it alive,” he said. “I’m a scary guy but not when it comes to adventurous stuff.”

Sunday’s episode, Tyson vs. Jaws: Rumble on the Reef special, with announcer Michael Buffer calling shots, took on the scenario of a match-up between the legendary heavyweight champion and the apex predator in Grand Bahamian waters.