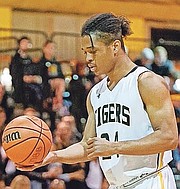 THE Atlantic University Sport conference championships will have a strong Bahamian presence after three teams clinched spots in the playoffs or top seeding over the weekend.

The AUS Championship will be hosted February 28 to March 1 at the Scotiabank Centre in Halifax, Nova Scotia.

The Tigers are the defending AUS champions and extended their win streak to seven with last week’s wins over the X-Men and most recently over the Cape Breton Capers Sunday night.

Burrows finished with 16 points, four rebounds and four assists while Wilson scored 12 in the 96-84 win over the X-Men.

The Tigers trailed 49-39 at the half but rallied in the second half.

Burrows assisted on a pair of baskets to give Dalhousie an 86-78 lead late.

The Tigers completed the weekend with an 83-68 win over the Capers to improve to 17-1.

The Saint Mary’s Huskies have overturned a slow start to the season and clinched their spot in the playoffs with their fourth consecutive win, 81-78 over the Capers.

The Huskies began the week with an 84-65 win over the Acadia Axemen. Gray finished with 13 points and seven rebounds while Gibson scored 12.

The StFX X-Men bounced back from their loss to the Tigers to defeat the UNB Reds 87-81 and improve to 10-7, second in the conference.

Roker, the leading rebounder and third leading scorer in the conference, posted another double double - 24 points and 16 rebounds.