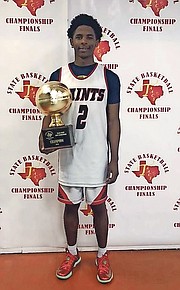 THEO Knowles, making the transition from playing in the Bahamas to the United States of America, helped the Faith Christian Academy Saints win their first senior boys Texas state league basketball championship title over the weekend.

“We started off pretty good. We went back and forth, but I told my team to let’s get it together. We won the playoff game and then we played for the championship and won,” he said. “I didn’t know what to expect because that team we beat blew us out twice in the regular season.

“Today, everybody just came with the mindset to win the championship. We did it when it really mattered the most.”

Knowles and the Saints played against Angleton Christian Academy Warriors, a team that had Faith Christian Academy’s number, winning in blowout fashion in their regular-season games played.

In the playoff game, Knowles scored 19 points. He came back in the championship game and finished with 10 points before he fouled out with about two minutes left in the game.

Athletic director and head coach Phillip Delarosa said they knew they had the team to get back to the championship, but the addition of Knowles gave them the incentive to go all the way and finally clinch the title.

“The teams have always been very competitive here and our boys have always gone to the playoffs,” Delarosa said.

“The good about the addition of Theo was that we were prepping and developing to be prepared to win the state championship in about two or three years because we were always so close. But in bringing him in, we had the added luxury to expedite that because he brought a lot of speed to the team. So that helped us a lot in our transition, both offensively and defensively.

“The one that helped us on both sides was the fact that Theo was a very strong player. He’s very quick and very knowledgeable about the game. He’s an impact player, not just a supporting cast.”

With all of the pieces they needed, Delarosa said they were on the verge of being a much better team to match up in the playoffs and eventually in the state championship with Knowles on their line-up.

“We were more of a running team than a passing team, so his speed kind of helped us with that and we became a little more dangerous,” Delarosa pointed out.

“So we would run a 2-3 defence and when he came on board, we went with a 1-3-1 defence and out him on top, just to put all the pressure on the ball.

“That was how he (Knowles) helped us to get over the top, not only to compete for the state championship but to win it.

“He helped us to develop more of a team concept basketball because he was more of an individual player and he learned how to manage the floor and involve the other players and to motivate them to help them pick up their game.”

Delarosa said Knowles helped them to become more of a dominant team once they got used to playing their style of basketball. He said Angleton Christian Academy was the only team that destroyed them during the regular season, so it was good for them to turn things around and upset them for the state title.

Knowles is the son of Charlene and Harvey Knowles Sr, who allowed their son to leave Temple Christian and the Suns basketball team in grade 11 for Houston, Texas, in August to complete his senior year at the Faith Christian Academy.