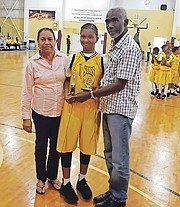 Alejandra Coste-Rojas receives her girls' MVP award from Cecil Thompson and his wife.

THE Temple Christian Suns advanced to both the boys and girls finals, but only managed to come back from Grand Bahama with one of the championship trophies in the HOYTES Gladstone ‘Moon’ McPhee/Cecil Thompson Primary School Basketball Tournament.

The Suns, regaining the girls’ crown, nipped the Teleos Christian Academy Cherubims 6-4 as Alejandra Coste-Rojas and Sameya Munnings both scored two points. Coste-Rojas was named the most valuable player.

Myrlanda Beaubrun had four points in a losing effort.

And in the primary boys’ finale, the Falcons got seven apiece from Condae Smith and Akari Major as Jordan Prince Williams pulled off a 21-13 decision over Temple Christian. Smith was named MVP.

Suns’ head coach Keno Demeritte said it was a very good tournament and despite the fact that they split the two titles, he was quite pleased with the efforts from his teams from Temple Christian Academy.

“Fatigue was a factor for us in the boys’ championship because we had to play four games that day, while Jordan Prince Williams only played twice in the playoffs and the championship game,” Demeritte said.

“Last year, our boys came in third, so it was good that they got into the final this year.

“Our girls lost the title last year for the first time in about 12 years, so they went back to redeem the title. It was a good showing because we had both teams in the championships. It was a good accomplishment.”

Next week, some of the teams are expected to travel to Mangrove Cay, Andros, to compete in a tournament that is being organised by coach Candice Smith.

Following that, the Bahamas Small Schools Sports Association playoffs are expected to get underway. Again, the majority of these teams will be participating in that league.