COVID-19 STOPS HUNTER AND THE REBELS 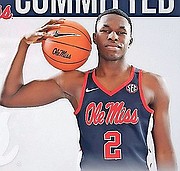 SAMMY Hunter and the Ole Miss Rebels will not tip off their season as scheduled due to a series of COVID-19 tests within the men’s basketball programme.

Ole Miss announced last night that Wednesday’s season opener against Central Arkansas has been cancelled, along with the remaining games of the Justin Reed Ole Miss Classic scheduled to continue through November 27.

With four games cancelled, Ole Miss is now slated to open its 2020- 21 campaign December 12, hosting UNCW in The Pavilion in Oxford, Mississippi.

In addition to the cancelled games, the programme has suspended all team activities until December 7.

An official press release issued by the programme said the student athletes and staff affected are taking appropriate safety measures in accordance with university protocol and contact tracing within the programme is taking place.

Names of other members of the programme to test have not been disclosed.

Hunter is in his sophomore season with the Rebels. As a true freshman, he played in 27 games, primarily off the bench, averaging 12.1 minutes per game and averaged 2.9 points and 1.4 rebounds per game.

He scored a career-high eight points in a November win over Western Michigan and finished with seven points and a career-high three blocks in a February win over Vanderbilt, tying for the most blocks by a Rebel in a game throughout the season.