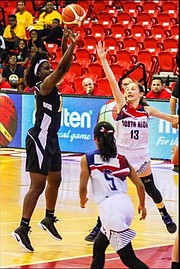 FROM the time she picked up a basketball under the supervision of coach Varel Davis at CH Reeves Junior High School, Briontae Riley knew that she was going to be something special.

Thanks to Bahamian Jaraun ‘Kino’ Burrows and his Raw Talent organisation, the versatile multi-talented Riley is heading to Grans, France, to play professionally for the Basket Club Gransois.

Riley, who was known for playing just about every sport in high school although basketball was her first love, will head out on Friday, September 18 to begin her sting as a six-foot forward.

“I’m very excited because this is something I wanted to do for a very long time. From when I started playing with coach Varel (Davis), that was really what she was pushing me for, so I’m really excited it’s finally coming to pass,” said Riley, who last year played for Holland College in Charlottetown, Prince Edward Island, in Canada.

Coming out of Canada she started in just two of the 19 games she played in, averaging 4.5 points in 12.5 minutes per contest.

Holland finished third in the Atlantic Collegiate Athletic Association with a 13-5 win-loss record in their regular season, and Riley said she’s out to prove that she has what it takes to play at the pro level. “I have the intentions to go there and give it my all.

Looking back at her career, Riley said it wasn’t an easy road, although she began playing on the junior national team with coach Davis at the age of 13 and then moved on to play with her on the Cheetahs team in the New Providence Women’s Basketball Association.

“When I heard that she got the deal, I was so happy and elated to see that someone that I taught and coached over the years, is planning on going overseas and playing basketball,” said Davis, who also doubles up as the president of the Government Secondary Schools Sports Association.

“Her hard work has finally paid off. I coached her on the national team for many years. She’s a very hard worker. She reminds me of myself, a very determined player, who never gives up. Although she had some disappointment in Canada, I was glad that she came back and worked herself in shape and now she’s heading off to France to play professionally.”

What is so gratifying for Davis, a former outstanding point guard on the national team, was the fact that when she got Riley interested in playing the sport, she didn’t know anything about it.

“To see her blossom is just an honour and a privilege. To see the hard work that you put into these young people are paying off. It’s an awesome feeling.”

After graduating from CH Reeves, Riley played one year for the Falcons at Jordan Prince Williams High, but then she moved to the United States to play for Texas Christian High School.

That was short lived as she returned home and enrolled at Doris Johnson where she helped the Mystic Marlins win three consecutive senior girls’ titles in the Government Secondary School Sports Association, along with three Geneva Rutherford Tournament and National High School Championship crowns.

While working at Atlantis and playing in the NPWBA, Riley said she never gave up on her dreams, although her hopes of getting back off the island and possibly playing in the Women’s National Basketball Association started to dwindle.

“I kept working out and playing basketball, trying to find ways to get back to college and hopefully get to the WNBA from there,” she said. “But this opportunity came up and I took it.”

The daughter of Patricia Riley and Basil Ferguson thanked God for his blessing, coach Davis for introducing her to the game and teaching her the basic fundamentals of the game, coach Kervon Spence at Doris Johnson, whom she said never gave up on her and Burrows and Raw Talent for making it possible for her to head off to France.

“Briontae is the first female that I’ve signed to the Raw Talent programme, but she has the same expectations as the young men, to come over and use the resources, skill trainers, the performance trainers and the weight trainers to develop her game,” said Burrows, who is back in France playing with the Fos Provence Basket pro team.

“There’s been a lot of success with the young men, starting with Nardo Bridgewater and Kenny (Isnord) and now Adam (Johnson).

“So more opportunities are coming with Raw Talent. But I thought this was the right fit for a talented young lady like Briontae to come to France and play. It has worked out well for her and so we’re just waiting for her to get here to get her career started.”

To the other local female players also following their dreams of playing professional basketball, Riley advised them that the WNBA is not the end of the road.

“I know everybody wants to play in the WNBA. I know I still want to,” she stressed. “But to the girls here, don’t give up because you never know when that chance might come. Sooner or later, it will come, so don’t give up, keep pushing and trying.

“I know I will do my best to try and open doors and opportunities for more players to actually join me in France.”

Davis, in sharing some parting words with Riley, indicated that he only expects the best from her.

“She knows the training that she got from myself, coach Spence and the other members of the national team, so if she can keep that same attitude up, she will be okay,” Davis stressed.

Riley, who will be coached by Alexi Ross in France, will be in Europe where she will join Lashann Higgs, playing for the Embutidos Pajariel Bembibre PDM of the Liga Femenina Endesa, the top division of women’s basketball in Spain.