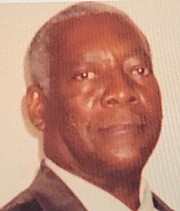 ASA Ferguson, a former baseball player who became involved in the Bahamas Association of Athletic Associations making great personal sacrifices, including mortgaging his home to sustain the sport financially, died on Saturday.

Married to Pam for more than 60 years, the 83-year-old Ferguson leaves four children - Gregory, Helen, Chandrice and Shannon - after he passed away at home, just days after he was released from Doctor’s Hospital.

Before he got involved in track and field, Ferguson was a member of the Bahamas Baseball Association when they got started in 1954. Ferguson got involved in track and field when the late Leviticus ‘Uncle Lou’ Adderley and Winston ‘Gus’ Cooper formed the Bahamas Association of Certified Officials (BACO) in 1975 in preparation of the BAAA hosting the CARIFTA Games for the first time in 1976.

As a long-time executive at the Bahamas Telecommunication Corporations’ Technical Department, Ferguson replaced Dionne Barrett as treasurer of the BAAA, serving from 1985 to 1997.

He was the manager of the Central American and Caribbean Championship team that went to Pounce, Puerto Rico in 1975 where Mike Sands won the gold medal in the men’s 400m.

He also attended the World Championships in Athens, Greece in 1997 and the Commonwealth Games in Kuala Lumpur, Malaysia in 1998.

Remembered by the BAAA for his unwavering commitment and dedication to the sport, Ferguson was also lauded for bringing the private sponsorship of NORTEL, through BATELCO, to the BAAA. “Every event held in the Bahamas after he came a part of it, he was involved in it,” said Alpheus ‘Hawk’ Finlayson, a long-time public relations officer of the BAAA. “He was the money man. He was the person on the gate. Even otherwise when we had some things, he just joined in and made it happen. He always had (Anthony) Boots (Weech) and the crew from Batelco working with him.”

If there’s anything that Finlayson could remember about Ferguson, it was the fact that he believed in his family and he cared for them.

“Asa, like many sports administrators of his era, made personal financial sacrifices so as to ensure that ‘national teams’ travelled,” said Sands, the former Bahamian national 400m record holder who eventually moved into the administration of the BAAA as a former public relations officer and president. “I vividly recall a team being at the airport waiting for a charter that was arranged by an individual, who will remain nameless.

“A deposit was made but the aircraft never arrived. As faith would have it, Harold Longley, then RBC’s big man, was also at the airport. To make a long story short, Harold told Asa that he needed ‘something/anything’ to hold as collateral, Harold called the bank, told them to accept whatever Asa brought in. We, myself along with Doyle Burrows, went to Asa’s office, got his landpapers and received about $40k against it..by the time we got to the bank..the funds were waiting.”

Sands said they got another charter and the team was none the wiser for what transpired, even though it took the BAAA about 10 years to pay Ferguson back.

“I thought the story was worth telling without fear of contradiction and for what it’s worth as to the true measure of the man, for those that may not be aware,” Sands said.

Frank Rutherford, the first Bahamian to win an Olympic track and field medal for the Bahamas at the 1992 Olympic Games in Barcelona, Spain, said he clearly remembers how Ferguson stood up for him when another former deceased BAAA executive criticised him like he did with so many other athletes.

“Asa, one time told one of his colleagues at the track one day ‘Ma, stop calling that young man a cripple jumper. That’s not good to tell a young athlete,’’ Rutherford recalled.

“I will not say who the colleague was, but Asa was always a man of seriousness, honesty, integrity and resolve.”

Strongman Bradley Cooper Sr, a two-time Commonwealth medallist in the discus with a gold in Brisbane, Australia in 1982 and silver in Edmonton, Canada in 1978, also offered his condolences to Ferguson’s family, whom he said grew him up in Salem Union Baptist Church.

“Asa was a great executive, who always spoke out against wrongdoing, no matter who it is,” Cooper Sr pointed out.

“I was an athlete under him many times and I also worked under him with the Bahamas Games. He knew what he wanted to accomplish and how.”