FACE TO FACE: When the Wilsons’ birthday bash turned into the feeding of 1,000 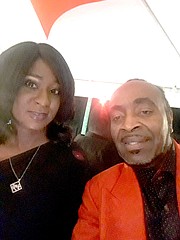 Finding food to put on the table has become a lot harder for many families in recent times. There is no doubt the pandemic has led to a downturn in the economy so much so that people from all walks of life are seeking financial assistance and food aid. So when one couple - facing uncertainty just like everyone else - decided to find a way to help feed people in need, I wanted to share their story.

Kenneth Wilson Jr and his wife Margarita both celebrated their birthdays in August. Close friends and family know this usually means a party in the backyard at their home with fun times, great music and tasty food. But, the pandemic put a temporary end to such gatherings.

The Wilsons came up with another way to share the love and this time they would go beyond the walls of their home. Initially, they thought they would try to cook their popular Bahamian meals for about a hundred people in need of a hot plate. Instead, they ended up feeding nearly a thousand.

This amazing feat was accomplished when some of those same family and friends got wind of their initiative. They got some help to pull it off, but the Wilsons still had to put in some serious elbow grease to cook that much food for so many people.

It’s a kind gesture that would have gone unnoticed as they sought no publicity.

But after hearing of their kind-hearted gesture - and having attended their down-home parties before - I wanted to share the story of two people who have been selflessly serving their fellow country men and women for decades.

I contacted Margarita, affectionately known as “Muggy”, to find out how it all began: “In honour of our birthdays, Ken and I decided to give back to our community. We contacted a few community organizations, namely Pilgrim Baptist Church, Mt Nebo Baptist Church, Blessed Hope Baptist Church, Families for All Murder Victims (FOAM), and the Royal Bahamas Police and Defence Forces to assist with identifying persons in need.”

Once they did that, they realised the need was great and that the best way to make a contribution would be to ask family and friends if they would like to be a part of a venture to give back. It was more than about feeding people; it was about reaching out and letting others know that you care. It was about providing a traditional Bahamian hot meal and nourishing bodies and souls.

Although it’s a time when you can’t give a hug or pat someone on the shoulder, you can hand them a plate of food and give them a good word, letting them know we can all get through this together, one day at a time.

For the Wilsons, that day was August 31 and that day they were able to give 900 people hot meals - a feat even they did not know they could pull off. Not only did they feed the community members, they turned around and fed 100 Police and Defence Force officers. Police officers from Fort Charlotte, Sea Breeze and Fox Hill also helped them to identify people in their communities who could benefit from the meals. Hot plates comprised of chicken and fish, peas and rice and pickled beets.

The community response was overwhelming and the Wilsons’ gift of giving back was truly appreciated. But it’s not the first time they have found ways to pour into others. I have known them both for many years and this is just their modus operandi. 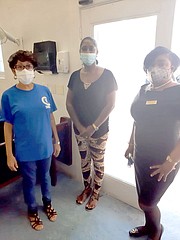 MARGARITA, centre, called on friends and family to help her help those in need.

Ken is an upbeat, passionate, generous individual whose charismatic and organized style has made him a protocol officer for many international events that have taken place in New Providence. His protocol skills even garnered him a special commendation from the Secretary of the Cabinet. As an official for the Division of Sports, Ministry of Youth, Sports and Culture, Ken has made significant contributions to the organisation and even implementation of sporting events and monuments in the country.

For example, he was instrumental in the introduction of the Frank “Pancho” Rahming Track and Field Championships, and I worked with him on one of the very first meets, which was a success. This event brings together primary school students from around the country to compete at the Thomas A Robinson Track and Field Stadium. It mimics the BAISS event and because of it, future track and field stars in the country are molded for greatness from an even younger age. They have an opportunity to show off their skills and, as expected, the event is wildly anticipated and attended by parents.

The Wall of Fame, which highlights Bahamian athletes at the Lynden Pindling International Airport, was instituted with assistance from Ken, who believes in the promotion of sports and stellar athletes in The Bahamas. Under the Division of Youth, his passion for empowering kids blossomed through the coordination of countless summer programmes. He served as manager of the Kendal GL Isaacs Gymnasium and manager of the South Beach Pools. He was also the government’s liaison officer for Track and Field, Golf and Bodybuilding. Now retired after 30 years of service, Ken still works in a consultancy capacity.

It was at Ministry if Youth, Sports and Culture that Ken met his wife, Margarita. The couple celebrate their tenth wedding anniversary this month. Muggy was instrumental in the Summer Youth Programme, where I met her decades ago. She was vibrant and fun, and made youth like me want to be a part of the meaningful programmes organized by the Ministry of Youth. She is known for her vibrant personality and commitment to the empowerment of young people. She moved from the Division of Youth to Sports, where she helped organize major events such as the CAC Championsips and the IAAF World Games. She served as the office manager during the construction of the Thomas A Robinson National Stadium. Muggy even served as liaison officer between the Bahamas and Chinese government during the process. Her diplomatic skills were honed over the past 20 years, as she is an active participant in the Ministry of Tourism’s “People to People” programme. She was a recipient of a Cacique Award in 2004 - the Minister’s Award. Of all her accomplishments, Muggy is most proud of being mother to her three sons - Kai, Joshua and Kenneth III.

“Due to the impact of COVID-19, a lot of people lost their jobs,” she pointed out. “We wanted to do something. We didn’t have much money, but we are good with our hands, and we love to cook. So, we decided to cook for those who needed it. Initially, we wanted to supply 200 meals. But after we reached out to the churches and NGOs, we realized there was a greater need, and we ended up feeding over 900 people.”

Ken and Margarita served the food themselves along with their sons Joshua and Kai. They were assisted by Holley Sands, Ashley Thompson, Thomasina Clarke, Willandria Clarke, Sherell Storr, and Suzanne Rolle.