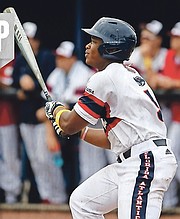 BJ Murray has established a reputation for electric starts on opening weekend and continued to build on that legacy to open the 2021 campaign.

Murray’s production at the plate helped his Florida Atlantic Owls open the season with a 2-1 series win over the No.24 ranked Central Florida Knights.

Over the course of the weekend, the sophomore third baseman hit .312 with a 1.040 OPS, six RBI, one double, one triple, one home-run, and four runs scored.

The Owls opened the season on February 19 with a 12-6 win at John Euliano Park in Orlando, Florida. Murray, hitting second in the lineup, went 2-5 with two RBI and scored one run.

In the top of the second, Murray hit an RBI triple to score Wilfredo Alvarez and give the Owls a 3-0 lead. Nolan Shanuel followed with a single to take a 4-0 lead.

In game two, Murray was a part of an Owls offensive onslaught that powered a 20-15 win at their home field, FAU Stadium in Boca Raton, Florida.

His night was highlighted by a two-run home-run in the eighth inning. He finished 2-6, with four RBI and scored three runs,

In game three, Murray went 1-5 and the Owls suffered a 15-6 loss in the series finale.

FAU continues their season on February 23 on the road against the Florida Gulf Coast Eagles. On the opening night of his true freshman season, Murray recorded the team’s first home run of 2019 in a shutout win over Cincinnati.

In 2020, He supplied FAU’s first homer of the season for the second straight season with a dynamic performance against Delaware.

He had an RBI single in his first at-bat, a two-run double the next inning, and two at bats later blasted a two-run home run to left.

The five RBI that night marked the most by an Owl on the season. He went on to add three more multi-hit games on the year.

Murray started each of the 15 games last season before the pandemic brought a halt to the 2020 season.

Defensively he had a .958 fielding percentage with 30 assists, 16 putouts, and just two errors.

Conference USA released its preseason team rankings and the league’s coaches voted the Owls to finish first in the C-USA East Division.

“The schedule will certainly be a lot different than it has in the past...The way we’re scheduling games, to stay out of hotels, is going to be unique.

“Fans are going to have to really pay attention to the schedule to make sure they get to the games (with the split series), but it’s going to be nice to just be back playing.”