‘How did Iraqi professor get senior U.B. role?’ 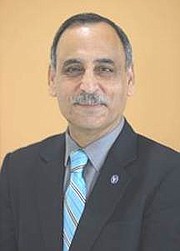 MEMBERS of the Union of Tertiary Educators of The Bahamas are up in arms over the appointment of Iraqi-born Professor Sarim Al-Zubaidy to the position of executive vice president of University of The Bahamas.

The appointment was announced last week and took effect on January 4.

UTEB’s president, Daniel Thompson said he cannot understand how Mr Al-Zubaidy was appointed when the university owes union members monies from as far back as 2011. He also said senior positions at the premier educational institution should be occupied by qualified Bahamian professionals.

He said while the union was engaged during the search process, executives are unhappy about the appointment.

Mr Thompson said: “We were a part of the search process. . . while we commend the university for engaging (in) a transparent process, we are surprised that in light of the current pandemic and the severe financial fall out, the government of The Bahamas, through the board of trustees, is prepared to permit the entry into The Bahamas of Professor Sarim Al-Zubaidy.

“He is now here. Faculty is still waiting on promotions and back pay from 2011. The university had promised, through the president, that those monies would have been available from October. He promised it again in November and December.

“It is now January and the back pay for people who were promoted from 2011, ten years ago, the university is not in a position to pay that back pay. Not even increments that the university had promised were paid.”

He also questioned if the new hire is receiving a generous salary and associated perks.

Last summer, UB President Dr Rodney Smith was shortlisted along with two other finalists to be West Virginia State University’s 12th president. He later said he withdrew his candidacy ahead of their decision but also confirmed last year that he will not renew his contract with the university when it expires in 2022.

Yesterday, the union leader speculated if Professor Al-Zubaidy will be called upon to lead the university should Dr Smith leave abruptly.

He continued: “. . .What I suspect the university is doing to protect itself to ensure that should the president get up and get another job offer and leave the university, then they will have someone to head the institution; the bringing Professor Al-Zubaidy in. If that is so, it creates a critical problem.

Prior to his appointment at UB, Professor Al-Zubaidy was employed as president of University of Trinidad and Tobago. According to a Trinidadian publication, Newsday, he resigned his post there after a tumultuous tenure as president.

UB, in a statement announcing his new role, hailed Professor Al-Zubaidy as a registered chartered engineer and chartered environmentalist with over 30 years’ experience in executive, administrative and academic positions in a variety of higher education institutions around the world.

“This is happening while Bahamians are being laid off, and the country is experiencing high unemployment, estimated at 30 percent to 40 percent by the Minister (of) Labour Senator Dion Foulkes in a June 3, 2020 interview,” Mr Thompson said of the appointment. “Further, he said that 55,000 persons have applied for unemployment benefits.

“Yet University of The Bahamas has (asked) the government of the Commonwealth of The Bahamas to issue a labour certificate and work permit for Professor Sarim Al-Zubaidy, notwithstanding formal protestations by UTEB. UTEB maintains that UB has internally, several Bahamian professionals, qualified and ready to serve or at least act in the executive vice-president position until a stable economic climate returns to the country.”

Attempts to reach Dr Smith and other school officials for comment were unsuccessful.