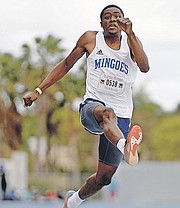 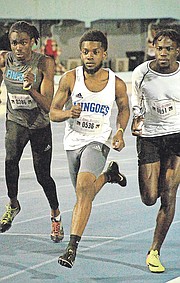 THE University of The Bahamas Athletics team picked up three wins to open the season at the T-Bird Flyers Track Classic at The Thomas A Robinson National Stadium over the weekend.

“We had some good performances to start the season,” head coach Ednal Rolle said.

“We can see the off-season work paying off and know where we can improve as the season progresses.”

Roberts won the open men’s 400m in a time 50.75 seconds and bested the field by almost a second and-a-half. Joel Forbes from Quick Step Athletics placed second in 52.05.

“It was pretty cold so I’m glad that I got the win with no injuries,” he said. “My plan was to get out to the first hundred as fast as I could and try to relax on the back stretch and then hammer it on the final stretch. It was pretty good for a season opener.”

“I felt like I could have done better,” she said.

“Being the first meet of the season, I take it for what it is and will build off of it and learn from the mistakes I made and work on not repeating them,” she added.

“I’m getting back into hurdling so I didn’t expect greatness,” she said. “I was really anxious to experience it all again and now I know what areas I need to focus on in practice.”

Tyler Gardiner was in the lead for the first 400 metres of the open men’s 800m event but got boxed in during the last 200 metres of the home stretch and could not break out for the finish. He finished third in a time of 2:01.97.

She finished 6th in that division. She is still eligible for the CARIFTA Track and Field Championships set for this year.

“I felt good about my start out of the blocks,” she said.

“I just need to work more on my drive phase and finish stronger.”