Joanna Evans second in heat – misses out on final

CO-flag bearer Joanna Evans made a splash in her signature event at the 2020 Olympic Games, but it was short of her getting into the final.

After carrying the flag with fellow Grand Bahamian Donald Thomas during the official opening ceremony on Friday night at the Olympic Stadium, she came back on Sunday for the first of her two events in the second of four heats of the women’s 400m freestyle at the Tokyo Aquatics Centre.

Evans, one of two Bahamians competing in swimming at the games, placed second in a time of four minutes and 07.50 seconds behind Julia Hassler from Liechtenstein, who won in 4:06.98. 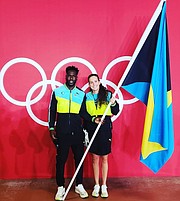 Donald Thomas and Joanna Evans with the Bahamian flag.

However, Hassler and Evans finished 12th and 13th overall as they both missed out on an opportunity to crack the top eight for the final today.  The eighth and final spot went to China’s Muhan Tang in 4:04.07. American Kathleen Ledecky had the fastest qualifying time of 4:00.45.

“Today was a solid first swim, not quite as fast as I’d hoped, but that’s the nature of the sport,” said Evans, who went into the race on lane five with a national record personal best time of 2:07.33.

With her first event under her belt after watching collegian Izaak Bastian make his Olympic debut in the men’s 100m breaststroke on Saturday, Evans said she’s looking forward to a new day Monday when she will get back into the pool to swim in heat three of the 200m freestyle – her second and final event of the games.

“It’s been a long day with everything and now I’m just making sure to refuel and get some rest before my next event,” said Evans, who had to undergo a doping procedure following her initial race.

The 24-year-old graduate of the University of Texas admitted that it was something different in not having any fans in the stands.

“Obviously, it is a little more quiet than usual, but the teams are doing a good job of cheering for people, so there’s a good atmosphere,” she stressed.

As for the honour of carrying the flag with Donald during the opening ceremony, Evans said it was special.

“Donald is a decorated athlete, so to be able to carry the flag alongside him was such an honour,” she stated.

At her initial appearance at the games in Rio de Janeiro, Brazil in 2016, Evans participated in the 400/800m freestyle where she fell short of advancing to the final. She’s eager to see how well she can do in the shorter combo this time around.

Thomas, along with the other 13 members of Team Bahamas athletic team, will begin competition on Friday, July 30 at the Olympic Stadium. Athletics is the only other discipline the Bahamas is participating in at these games that will wrap up on August 8.