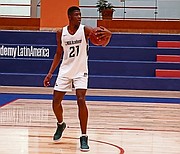 The 17-year-old 6’10” front court player reportedly received offers from the Creighton Blue Jays, Louisville Cardinals and Washington State Trojans. ESPN also listed King as one of the top prospects emerging from the event for the class of 2022.

King averaged 23 points and 12 rebounds per game on 77 percent shooting from the field at the event hosted by his NBA Academy Latin America programme in San Luis Potosi, Mexico.

He opened with 31 points and 16 rebounds for NBA Latin America to an 82-61 win over NBA Africa Red and followed with 29 points and 13 rebounds in a 93-87 over The Skills Factory.

ESPNs Jonathan Givony said King’s stock was the fastest riser of any prospect at the camp.

“King exploded onto the radar of NBA scouts and college coaches…it was impressive to see King’s poise and maturity,” Givony said.

“He anchored his team’s defence, created offence from the mid- and low post, and found teammates with intelligent passes all weekend long. With a remarkably high intensity level, King played to near exhaustion, almost never leaving the floor and constantly battling on both ends of the floor.”

King made Bahamian basketball history last January when he became the country’s first student athlete to enrol in one of the NBA’s global academies.