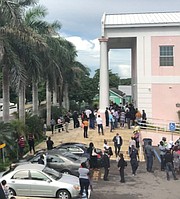 A LACK of electricity forced the Magistrate’s Court to adjourn Monday’s court cases to a later date.

Thunderstorms and heavy showers left the court complex in complete darkness after 9am yesterday. The building’s generator failed to supply back-up power during the outage and civilians and attorneys were forced to wait outside on the staircase for updates. Little social distancing protocols were adhered to at this time.

Shortly before 11am, court orderlies informed the waiting public that matters scheduled to be heard yesterday were being adjourned.

The Tribune understands some court cases have been rescheduled for as early as today, while others have been put off until the end of this month.