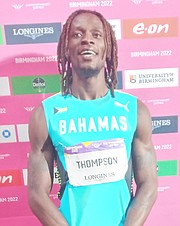 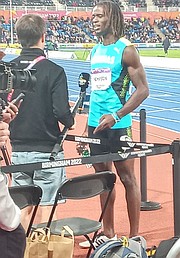 DECATHLETE Kendrick Thompson is interviewed by the media yesterday. He was in 7th place after day one of the decathlon at the Commonwealth Games.

BIRMINGHAM, England — Although he’s currently in seventh place in the men’s decathlon at the 2022 Commonwealth Games, Kendrick Thompson said he still has the confidence that he can perform much better.

In his debut at the global international level, Thompson mustered a total of 3,883 points from the first five events on day one of the men’s decathlon yesterday at the Alexander Stadium. Grenada’s Lindon Victor is out front with 4,327 points.

“For my first major decathlon, I fell short in a couple of events, but I’m happy with the results. I’m really happy with myself,” Thompson said. “I know what I have to do tomorrow (today) to get back in the competition, so I just have to go out there and do it.”

“I was really proud of LaQuan. He inspired me to go out there and really do the 400m,” said Thompson, whose final event of the day came just as Nairn was taking his victory lap.

As he started off the two-day competition, Thompson shook off a false start as he had to settle for seventh in the second run of the 100 metres in 11.18 seconds for 821 points.

“The crowd was so supportive of all of us,” Thompson said. “I never heard so much people cheering for me in my life. That helped to encourage me to go out there and do it when I struggled in some of my events.”

The 24-year-old Thompson, who attends the University of the Bahamas, will come back today to close out competition in the 110m hurdles, discus, pole vault, javelin and the 1,500m.

Yesterday, Denisha Cartwright just missed out on a spot in the semi-final of the women’s 200 metres after she placed fifth in the fifth of seven heats in 24.49 for 25th overall. Abi Galpin of Guuernsey got third in the third heat in 24.47 for the 24th and final spot.

The top qualifier was Favour Ofili of Nigeria in 22.71. Jamaica’s Elaine Thompson-Herah, coming off her gold medal in the 100m the night before, had the second fastest time of 22.80.

Tynia Gaither, seventh in the 100m, was scheduled to compete in the half-lap race, but she left for Poland to compete in her next meet on the European circuit.

Today, joining Thompson in competition will be Devynne Charlton and Alonzo Russell, while Kaiwan Culmer will have to wait until Sunday to get in his action.

Charlton, the national record holder, will open her quest for her first Commonwealth Games medal to add to the World Indoor silver she got in March when she competes in the second of three heats in the 200m hurdles in lane five at 5:36am EST.

Tobi Amusan of Nigeria, who established a world record in the semi-finals before she won the gold medal in the final, is a part of the field that will also include Jamaica’s Megan Tapper, who will run in lane three in the same heat with Charlton. Amusan will be in heat three.

The 30-year-old Russell, who got third in his first round heat in 46.41 for 15th place overall, will run out of lane nine in the last of the three heats of the men’s 400m semi-finals.

He will have to be one of the top finishers or wait for one of the two slowest times to advance to Sunday’s final at 5.45 am EST.

Culmer’s triple jump has gone to a straight final on Sunday at 8:05 am EST. He will be the final competitor to compete for the Bahamas as there are no teams entered in the 4 x 400m relays for women and men to bring the curtain down on these exciting games.

On Saturday, the wrestling competition will begin with two Bahamians participating at the Coventry Stadium.