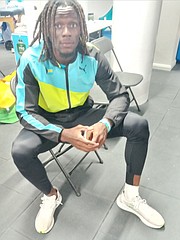 Kendrick Thompson after his withdrawal from the event.

BIRMINGHAM, England: An injury to his left ankle during the pole vault competition forced Kendrick Thompson to withdraw during the javelin throw from the men’s decathlon at the 2022 Commonwealth Games on Friday night.

After he twisted his ankle on his second height in the pole vault at the end of the early morning session at the Alexander Stadium, Thompson got some treatment and was able to return to start the evening final session.

Then 24-year-old Thompson took one throw in the javelin and left the competition. He was in too much pain to come back out to complete the gruelling two-day event in the 1,500 metres, which didn’t allow him to have any scores posted to his ledger at the end of the night.

“After I cleared the first height at 4.20 metres, I tried to go for the second height at 4.30m when I landed awkwardly and twisted my ankle,” Thompson said. “I tried to go in the javelin, which was my best event, but I couldn’t do no more after the first throw.”

Grenada’s Lindon Victor went on to secure the gold in the event with 8,233 points, while Australia got the silver and bronze from Daniel Golubovic and Cedric Dubler with 8,197 and 8,030 points respectively.

Thompson, who made history as the first Bahamian to compete in the multi-event at these games, was sitting in seventh place at the end of the first day of competition with 3,883 points.