DIANE PHILLIPS: Who really named The Bahamas? Was it Lucayans, not the Spanish and does it really mean what we think?

FOR AS long as any of us can remember, we have believed what we have been tol that the Spanish who first discovered these islands in 1492 gave them their name, Bahama, meaning shallow sea. 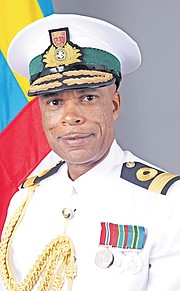 Now along comes historian and author Commodore (Ret) Tellis Bethel and says, not so fast, these islands were named long before the Spanish arrived in the late 1400s. They were named by the indigenous Lucayan Indians who inhabited the Lucayan Archipelago from 700 AD or even earlier.

In his latest book, How The Bahamas and Turks and Caicos Islands Got Their Names (Inspire Publishing 2022), Commodore Bethel gives us six solid reasons for the conclusion, any one of which is enough to give credence to his argument. Here are two.

One of the most compelling reasons for the conclusion is that those with the extraordinarily rare opportunity to name a place they have discovered name the landmass, not the waters. To think of the waters instead of the place would be like calling New York City the Hudson River.

In fact, explains Bethel, what Italian navigator Christopher Columbus under Spanish authority called the territory they landed on “Islands and Mainland of the Indies in the Ocean Sea”. Why did they call it that? Because they believed they had landed in the spice islands of the East Indies.

History shows the tragedy of their epic mistake. It was not the Indies off Asia as Columbus thought, nor was it spices or gold the discoverers of the New World found, but cheap labour, plenty of it in the Taino and Lucayan people whom they rounded up and exported to other islands or carried back to Europe where they perished from disease and other causes, including distress.

With meticulous research and patience, Bethel poured through hundreds of documents – and he is not alone in this – finding references only to the Islands of the Ocean Sea off the Asian Mainland in terms of Europeans naming what we know as The Bahamas and Turks and Caicos Islands. Ocean Sea was so accepted as the name that when Isabella, Queen of Spain, wanted to reward Columbus he was given the title Admiral of the Ocean Sea.

So if the Spanish did not refer to the country as Bahama, but only as Isles of the Ocean Sea or Yas de los Lucayos, (Yas being short for Isles; also spelled Las Islas) where did the word come from?

Commodore Bethel cites a scholarly work on ancient languages of the Antilles by Julian Granberry and Gary Vescelius (deceased) published by the University of Alabama Press in 2004. The work traces the first reference to Bahama as meaning “large upper middle land”, with each of the individual islands in the Lucayan Islands having its own name long before contact with Europeans (like Habacoa for Abaco). Broken down into its smallest parts, the name Bahama is Ba, meaning big, great and large, ha means upper, and ma means middle. The word Grand was added later during European colonisation, but it was the large island in the northwestern Bahamas that first carried the Bahama name and that name was given by the Lucayans hundreds of years before Columbus ever set foot in the New World.

According to Bethel, what we now know as Grand Bahama was in the centre and often the crosshairs of the maritime world around the nation -- the vast marine banks, international shipping channels, major maritime catastrophes, Spanish treasure fleets, and billions of dollars in lost treasure near the island. In that sense, Grand Bahama played a pivotal role in the seafaring history of the archipelagic nation.

The second compelling reason to disavow the idea that the Spanish named The Bahamas for shallow sea is that the letter h in the middle of the word had largely vanished from the Spanish dictionary or vocabulary centuries earlier but was reintroduced by Spanish authorities before Columbus’ time. The letter j was not used interchangeably with the letter h during this period. The Spanish spelled indigenous words based on how they sounded as noted in Jumeto (a cay in the Ragged Island chain) and Guanahani, the island of Columbus’ first landfall. Pronunciation of the h and the j were very different in the two languages, soft in Lucayan, harsh in Spanish, whereas the letter h would have been soft in Spanish, making Bahamas a Taino- Lucayan, not Spanish, derivative.

Baja Mar does mean shallow sea, explains Commodore Bethel, and while it may seem a small distinction that The Bahamas takes its name from the Lucayan naming of one island, the island we now call Grand Bahama, it reinforces the importance of remembering the indigenous people of The Bahamas, the Lucayans.

“Regardless of the Bahama name’s historical roots, it would be safe to say that what exists today is a country whose name is Lucayan origin but carries a Spanish meaning, (shallow sea) in the minds of some,” the author writes.

Bahama and The Bahamas - Lucayan-Taino in origin, interpreted by some in the Spanish as shallow sea with an ‘s’ added later during the English colonial era, it’s little wonder we are confused, the coincidence is a big as a coincidence gets.

All of this may not seem as important as today’s headlines or tomorrow’s worries, but Commodore Bethel has good cause for wanting to get things right and pay homage to the indigenous people of The Bahamas.

His current position is head of the Security Forces Inspectorate and he is, like all of us, deeply disturbed by the violence in the country. He has seen what crime does, how it tears apart families, shakes confidence, destroys a culture that was once proud of being a warm, accepting and peace-loving people. If we remember our roots, he says, if we make them part of who we are today, if we have constant reminders of where we came from, we may have a better, more peaceful, path going forward.

There’s another interesting twist to the name of the indigenous people themselves. The word Lucayan means Island People.

“Just as the Island People were on a quest for a better life through peaceful means, we have an inherent responsibility to make the world a more peaceful place in light of the Lucayan demise,” he says.

That is also one of the reasons he has spent a decade campaigning for naming the waters the Lucayan Sea. He also reminds us that naming our waters will give us an identity of which we can be proud. A former pilot and diver, Commodore Bethel has probably sailed or flown over every square inch of The Bahamas in his long career with the Royal Bahamas Defense Force and it breaks his heart to think that the waters declared the most beautiful on earth from the vantage point of space have no identity of their own but are just a part of the vast Atlantic Ocean.

His campaign is gaining momentum. Let’s hope this administration recognises the benefits that would instantly accrue from a distinct identity with visitors sailing the Lucayan Sea and locals fishing, swimming, snorkeling and just viewing what we know as our own special ocean, a place like none other, in a country named for an island in its midst by an island people who need to be remembered.