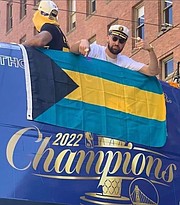 KLAY Thompson displaying the Bahamian flag on the Warriors float parade on Monday.

HAVING watched as his son surpassed his achievements before his injury two and-a-half years ago, Mychal ‘Sweet Bells’ Thompson was grateful to witness Klay Thompson’s return to the Golden State Warriors as they reeled off their fourth National Basketball Association championship title.

Thompson had sustained an anterior cruciate ligament (ACL) injury in Game 6 of the 2019 NBA Finals and missed the entirety of the 2019-20 season. Thompson then suffered a torn Achilles tendon while recovering from his knee injury and missed the entire 2020-21 season as well. He returned to play in January 2022, after missing nearly 31 months.

After he helped the Warriors stun the Boston Celtics in a 103-90 rout to end the series 4-2 on Thursday night in Boston, Thompson draped himself in the Bahamian flag as he celebrated with his team-mates. They returned to San Francisco for their parade through the streets on Monday.

“Shout out to my Bahamian family in Nassau watching...can’t wait to spend the summer with you,” Thompson said.

Prime Minister Philip ‘Brave’ Davis was one of the first Bahamians to congratulate the 32-year-old Thompson on his achievement.

“We are proud of you! @KlayThompson. I can’t wait to celebrate with you when you get home,” Davis tweeted on social media.

On hand in Boston to join in the celebrations was the elder Thompson, along with his two other sons, Michael Thompson, who is now a member of the Warriors’ coaching staff and Trayce Thompson, just recently added to the Los Angeles Dodgers Major League Baseball team.

The elder Thompson, who would have earned two NBA titles with the Los Angeles Lakers during the “Showtime” era in 1987 and 1988, said he’s thankful to everybody who helped Klay Thompson in his recovery and the many persons who offered prayers on his behalf.

“We have a lot of people to thank and to be grateful for,” the elder Thompson said. “Above all, we thank God for his grace and mercy to bring Klay back.”

Like he’s been there for the three other titles with the Warriors in 2015, 2017 and 2018, the elder Thompson said it was “nervewrecking” because he wanted Golden State to win “so badly” and he could only sit and watch.

It was a mixture of emotions, including pleasure, agony, and anxiety that the elder Thompson went through because he said he wanted it so bad for his son, and the Warriors.

“I just congratulated him and told him how proud I was of him,” said the elder Thompson as the two embraced. “I told him about how hard he worked to get there and how much he respected the game by doing things, he was rewarded.”

For the first time, Thompson had his two other sons on the same stage at the same time as they joined Klay Thompson in celebrating the victory that extended until about 5am the next morning in Boston.

“It was a blessing. This was the most gratifying celebration because all of his brothers were there,” the elder Thompson said. “That made it so special to see all everyone there.”

For the elder Thompson, who was the first foreign-born player to be selected as the number one player in the NBA in 1978 by the Portland Trail Blazers, it was even more thrilling to watch as Klay Thompson, an 11th-round pick in the first round of the NBA draft in 2011, draped himself with the Bahamian flag.

“Klay always appreciated and respected and loves the Bahamian side of his blood,” said the elder Thompson, who is still mourning the passing of his older brother Colin Thompson.

“The Bahamas is his other home. He has family back there and Nassau is his home too. He feels he has two homes, the United States and the Bahamas, so he’s proud to have that Bahamian blood in him.”

As he’s done in previous championship victories, the elder Thompson said Klay Thompson will be returning to the Bahamas in July during the annual Jeff Rodgers Summer Basketball Camp in July to celebrate with the Bahamian people.

“We are planning to have all of the boys down there with us to celebrate,” the elder Thompson said.

Having won their fourth title, the elder Thompson said the Warriors created a dynasty of their own and with their big trio of most valuable player Steph Curry and Draymond Green, they have formed one of the best scoring tandems ever assembled in the NBA.

“You always think about your time in the league and when you won. Those are memories that you will hold onto forever,” the elder Thompson said. “But you’re more happier when you see your son achieve what Klay has been able to do with Golden State, it’s even more gratifying.

“When I was playing, my boys were very young. At the time, I knew they were going to be athletic, but I didn’t know that any of them would have done what Klay did. I know Klay would have had a good college career and gone on to win, but it’s so good to see him win not just one, but four championship titles.”

And with the Dodgers performing as well as they are right now, the elder Thompson said if Trayce can remain in Los Angeles and they go on to win the Major League title, it will be another phenomenal year for the Thompson family.

As a television colour commetator with the Lakers since the 2003/04 season, the elder Thompson said the Warriors have a chance to get back to the NBA finals with the young core of players that surround the big three of Curry, Green and Thompson.

But he warned that after missing the playoffs this year, the Lakers will be back bigger and better under Darvin Ham, who earlier this month was introduced as the 27th coach in Los Angeles history, replacing Frank Vogel.

“They have to find guys who can play with LeBron (James) and AD (Anthony Davis) and be able to knock down some shots,” the elder Thompson said. “If they can do those two things, they will be much improved.”

As for high-scoring point guard Russell Westbrook, the elder Thompson said if coach Ham can get him to accept a role off the bench and be a facilitator in a different role, he would be able to help out the Lakers tremendously.

If they don’t make the necessary adjustments, the elder Thompson said the Warriors could end up once again being the team to watch and beat out of the Western Conference.