FIBA Centrobasket: Bahamas gets 79-59 win over Turks and Caicos Islands 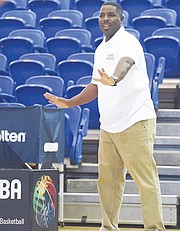 After a trio of lopsided losses to open the tournament, Team Bahamas responded with a pair of wins to conclude the group stage at the FIBA Under-15 Centrobasket Championships for boys.

The Bahamas took a 24-15 lead after the first quarter and the lead reached double figures for the first time when Hall made a three pointer at the 2:58 mark in the second to make the score 33-21.

The Bahamas maintained a nine-point lead at the half (36-27) and took a 61-45 lead into the fourth quarter.

With a 2-3 record in the group stage, The Bahamas will be relegated to the 5-8 seeding round.

The top two teams from each group will advance to the Semi-Finals.

In the Semi-Finals, the top two teams from each group will face the second team of each opposing group (1A vs 2B and 1B vs 2A).

The Bahamas opened the tournament with a 107-42 loss to Puerto Rico.

Kenyon Johnson and Condae Smith both came off the bench, scoring six points.

Noah Bain also came off the bench, producing the best production for Team Bahamas with 13 points on 6-for-13 from the field with seven rebounds and three steals. Michael Munnings followed with nine points and five rebounds and Bradleon McDonald added eight points with three rebounds.

Playing their third straight game in three days, the team lost 70-59 to the Dominican Republic on Monday.

Bain had a game high 14 points with five steals, a pair of rebounds and as many blocked shots to lead a balanced scoring attack.

The team is coached by Quentin Hall, Denykco Bowles and Kevin Clarke.