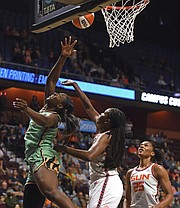 New York set a season high for first-half points with 51 after shooting 48.7 percent from the field, including 10 of 21 behind the arc. Six different New York players made a 3-pointer in the first half, including every starter.

The Liberty finished at 44.9 percent overall, going 13 of 32 from behind the arc. Sami Whitcomb made her fourth 3-pointer, capping a 7-0 run, to extend New York’s lead to 65-54 midway through the third quarter.

Ionescu missed a free throw with 8.7 seconds left to break her string of 36 straight makes.